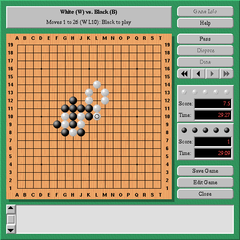 CGoban (Complete Goban) is a computerized board on which you can play the game of Go against another player, view and edit smart-go files, and connect to Go servers on the internet. It can also interface with computer Go programs such as GNU Go that speak the Go modem protocol. Some sort of image converter is needed if you wish to use the utility provided to capture "screen shots" of a CGoban game. Go is an ancient game originated from China, with a definite history of over 3000 years, although there are historians who say that the game was invented more than 4000 years ago. The Chinese call the game Weiqi, other names for Go include Baduk (Korean), Igo (Japanese), and Goe (Taiwanese). In this game, each player tries to exert more influence on territory than her opponent, using threats of death, capture, or isolation. It is, therefore, a symbolic representation of the relationships between nations. Go is getting increasingly popular around the world, especially in Asian, European and American countries, with many worldwide competitions being held. The game of Go is played on a board. The Go set is comprised of the board, together with 181 black and 180 white stones. The standard board has 19 lines by 19 lines, but 13x13 and 9x9 boards can also be used. However, the 9x9 and 13x13 boards are usually for beginners; more advanced players would prefer the traditional 19x19 board. Compared to International Chess and Chinese Chess, Go has far fewer rules. Yet this allowed for all sorts of moves to be played, so Go can be a more intellectually challenging game than the other two types of Chess. Nonetheless, Go is not a difficult game to learn, so have a fun time playing the game with your friends. (adopted from http://senseis.xmp.net/?WhatIsGo)