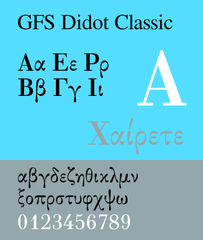 Under the influence of the neoclassical ideals of the late 18th century, the famous French typecutter Firmin Didot in Paris designed a new Greek typeface (1805) which was immediately used in the publishing programme of Adamantios Korai, the prominent intellectual figure of the Greek diaspora and leading scholar of the Greek Enlightenment. The typeface eventually arrived in Greece, with the field press which came with Didot’s grandson Ambroise Firmin Didot, during the Greek Revolution in 1821. Since then the typeface has enjoyed an unrivaled success as the type of choice for almost every kind of publication until the last decades of the 20th century. Didot's original type design, as it is documented in publications during the first decades of the 19th century, was digitized and revived by George D. Matthiopoulos in 2006 for a project of the Department of Literature in the School of Philosophy at the University of Thessaloniki, and is now available for general use.