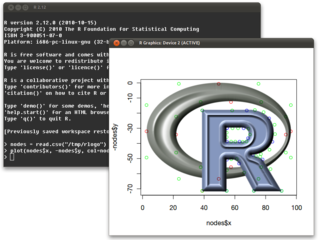 R is a system for statistical computation and graphics. It consists of a language plus a run-time environment with graphics, a debugger, access to certain system functions, and the ability to run programs stored in script files. The design of R has been heavily influenced by two existing languages: Becker, Chambers & Wilks' S and Sussman's Scheme. Whereas the resulting language is very similar in appearance to S, the underlying implementation and semantics are derived from Scheme. The core of R is an interpreted computer language which allows branching and looping as well as modular programming using functions. Most of the user-visible functions in R are written in R. It is possible for the user to interface to procedures written in the C, C++, or FORTRAN languages for efficiency, and many of R's core functions do so. The R distribution contains functionality for a large number of statistical procedures and underlying applied math computations. There is also a large set of functions which provide a flexible graphical environment for creating various kinds of data presentations. Additionally, several thousand extension "packages" are available from CRAN, the Comprehensive R Archive Network, many also as Debian packages, named 'r-cran-<name>'. This package is a metapackage which eases the transition from the pre-1.5.0 package setup with its larger r-base package. Once installed, it can be safely removed and apt-get will automatically upgrade its components during future upgrades. Providing this package gives a way to users to then only install r-base-core if they so desire.