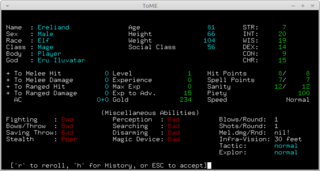 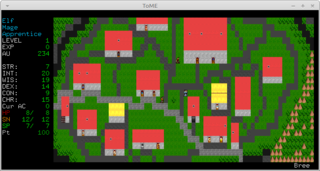 Tome, short for Troubles of Middle Earth, is a single-player, text-based, dungeon simulation derived from the game angband, which in turn is derived from the older game Moria, which was in turn based on Rogue. It is often described as a "roguelike" game because the look and feel of the game is still quite similar to Rogue. In tome, the player may choose from a number of races and classes when creating a character, and then "run" that character over a period of days, weeks, even months, attempting to win the game by defeating Morgoth, who lurks somewhere in the depths of the dungeon. The ultimate goal of the game is to develop a character strong enough to defeat Morgoth, who resides on dungeon level 100. Upon doing so, you will receive the exalted status of "winner" and your character may retire. The first main difference from Angband a new player to ToME will need to be aware of is that it has implemented a skills based system where instead of the adventurer automatically improving in their abilities as they become more experienced, they get 5 skill points to spend on their character's abilities and can therefore customise what type of character they play. See the skills help file for details The second major difference is that the main dungeon from Angband has been split into 4 "dungeons", each of which cover a different portion of the dungeon's levels. Note that not all of the places are actually "dungeons" - some are caves, forests, etc. The third main difference between Vanilla Angband and ToME is the difference in character classes and races, as well as a very different magic system. ToME also offers the player the ability to undertake a series of quests. It is not required for any adventurer to undertake the fixed quests, but they can result in some nice rewards. Morgoth was 'the Dark Enemy of Middle-Earth' during its First Age. He was banished by the Valar (offspring of Eru, "god" of J.R.R. Tolkien's world) at the end of the First Age and thus never appears in The Lord of the Rings, set during the Third Age. Sauron, who does figure into those tales, was the most powerful of his servants. Read Tolkien's 'The Silmarillion' for more on the legends of Middle-Earth. Angband is a reference to Morgoth's "prison of iron."